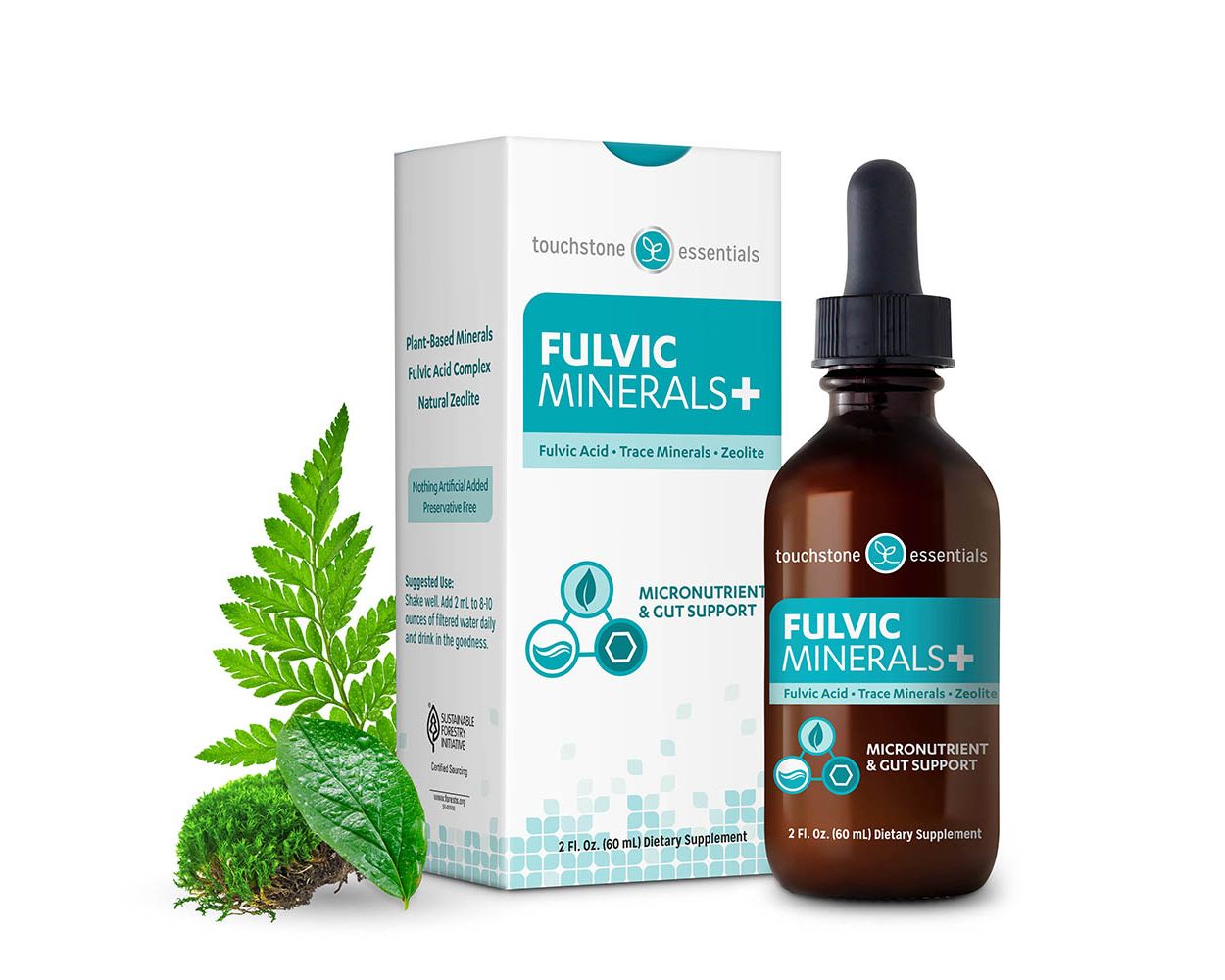 Give Your Body a Natural Edge

Food used to provide everything our bodies needed to thrive. Decades of conventional farming methods have depleted the soil of nutrition, resulting in crops that look the same but are lacking in vital nutrients, especially trace minerals and fulvic compounds.

Discover the goodness of Fulvic Minerals+ with natural fulvic compounds extracted from pure sources, trace minerals from sustainably-sourced seaweed, and natural clinoptilolite zeolite for maximum detoxification. It is lab-tested for purity and the drops are easy to add to your favorite drink for daily use.

Formed over a long time as plant matter distills into complex organic substances, fulvic acid is a rich source of revitalizing compounds that cannot be replicated in a lab. Fulvic Minerals+ sources fulvic acid complex from a remote peat bog in Canada that is free of environmental toxins and rich in organic fulvic compounds. This fulvic acid is extracted without solvents, and concentrated into liquid drops for a powerful boost that benefits the whole body, supporting gut health, energy, immune function and more.

Abundant in minerals, seaweed has long been consumed in Japan and other cultures for its health benefits. The marine alga in Fulvic Minerals+ has been sustainably harvested from nutrient-rich waters in the North Atlantic and contains dozens of trace minerals vital for optimal health. Unlike rock-based minerals, plant and algae-based minerals are in their most bioavailable form for the body.

Natural zeolite Clinoptilolite supports detoxification by binding to heavy metals and other environmental toxins. The zeolite in Fulvic Minerals+ is the same one used in Pure Body drops, which has thousands of five-star customer reviews. Our zeolite undergoes a proprietary cleansing and sizing process so it's activated for maximum detox benefit in the gut.

Fulvic Minerals+ is free of preservatives, is gluten-free, and is vegan friendly. It's an easy way to nourish your gut, support natural immunity, and get more nutrients every day. Simply add drops to your drink to give your body a natural edge.

Formed over a long time as plant matter distills into complex organic substances, fulvic acid is a rich source of revitalizing compounds.

Natural clinoptilolite zeolite is renowned as a master detoxifier that binds to heavy metals and toxins while supporting the gut.

“You can trace every sickness, every disease and every ailment to a mineral deficiency.”

​Food used to provide everything our bodies needed to thrive, including vitamins and minerals. Decades of conventional farming methods have depleted the soil of nutrition, resulting in crops that look the same but are lacking in key nutrients.
In response, food companies add back in synthetic lab-made vitamins, which are poor copycats of natural plant-based nutrients. As a result, people are increasingly tired, rundown, and susceptible to a long list of immune issues.

While root vegetables such as radishes and parsnips contain some fulvic acid, most conventional soils are lacking in organic plant matter, resulting in food that is depleted of fulvic acid and the trace minerals we need to thrive.

However, there are some isolated deposits, untouched by agriculture, where fulvic acid is abundant. Over a long period of time, these rare sites distilled plant matter into the complex organic substances for which fulvic acid is renowned.

Compounds in fulvic acid nourish the gut and support a healthy microbiome, for improved digestion and less bloating.

Over 70% of the immune system lives in the gut. A healthier gut means stronger immunity, so your natural defenses work better.

​Trace minerals and fulvic compounds bolster the absorption rate of nutrients so you get more nutrition from the foods you eat.

Fulvic acid compounds can easily pass through cellular membranes, facilitating the delivery of nutrients and removal of waste, for optimal cell function.

​Several minerals act as natural electrolytes, which activate biological processes for increased energy without the downside of stimulants such as caffeine.

Fulvic acid is believed to bind to certain toxins, helping to detoxify the body. When fulvic is combined with natural zeolite, nature’s master detoxifier, even more heavy metals and toxins are removed.

Give your body a natural edge with Fulvic Minerals+, the only fulvic supplement to combine the power of fulvic acid, plant-based trace minerals, and natural zeolite. Experience goodness in every drop.

How to Use Fulvic Minerals+

Each bottle of Fulvic Minerals+ contains 30 servings (one per day). Each serving of Fulvic Minerals+ provides 100mg of trace minerals, 50mg of fulvic acid, and 15mg of natural clinoptilolite zeolite to support gut and immune health, natural energy and detoxification.

To use, shake the bottle well and then using the provided dropper, add 2 mL to 8-10 ounces of filtered water. Then drink in the goodness of every drop, either at once or throughout the day. Fulvic Minerals+ can be taken with food for optimal absorption.

As with any supplement, consult your health care practitioner before using, especially if you are pregnant, breastfeeding, or under medical care. Keep the bottle in a cool, dry place and out of the reach of children.

Because modern farming practices have destroyed our soils, our food supply is lower in naturally occurring fulvic acid. Yet research has shown that fulvic acid can ensure we grow strong and healthy by benefiting digestion, the absorption of nutrients, gut and immune health, cognitive functioning, skin health, slowing down the aging process and improving energy levels. —Cindy Klement, MS, CNS, MCHES

Compounds in fulvic acid nourish the gut and support a healthy microbiome.

Over 70% of the immune system lives in the gut. A healthier gut means stronger immunity.

Fulvic acid is believed to bind to some toxins, helping to detoxify the body.

A growing body of research by scientists from around the world is reaffirming the benefits of natural compounds for human health. While a full compilation of studies can be found on the National Library of Medicine website (PubMed.gov), several notable research papers are provided for educational purposes to learn about fulvic acid, trace minerals, and natural clinoptilolite zeolite.

Nourished by nutrient-rich waters, seaweed (marine alga) provides a rich source of trace minerals which are recognized as essential for optimal health and well-being. Unlike rock-based minerals, plant or algae-derived minerals are in a form that is bioavailable for the body for maximum absorption.

Almost all food and water contain some levels of heavy metals, simply because these toxins are present everywhere in our environment. And while our bodies can metabolize some toxins, over time these heavy metals can build up in the body. That's why it's essential to detoxify the body daily.

Because fulvic acid comes from concentrated plant matter, it can have elevated heavy metals, and some sites may have high levels of environmental contaminants. Fulvic Minerals+ features fulvic acid from a pure source, is carefully harvested (no chemical solvents), and is tested by an independent laboratory to affirm it is extremely low in heavy metals, FAR lower than the limits set for dietary supplements. This ensures you can enjoy all the benefits of fulvic acid and trace minerals, without any concern of toxins.

Fulvic Minerals+ is cultivated from the purest sources, and is tested by an independent laboratory. It is the cleanest way to get more fulvic and trace minerals each day. Fulvic Minerals+ also includes the natural zeolite Clinoptilolite, supporting gut health and your body's ability to detoxify.