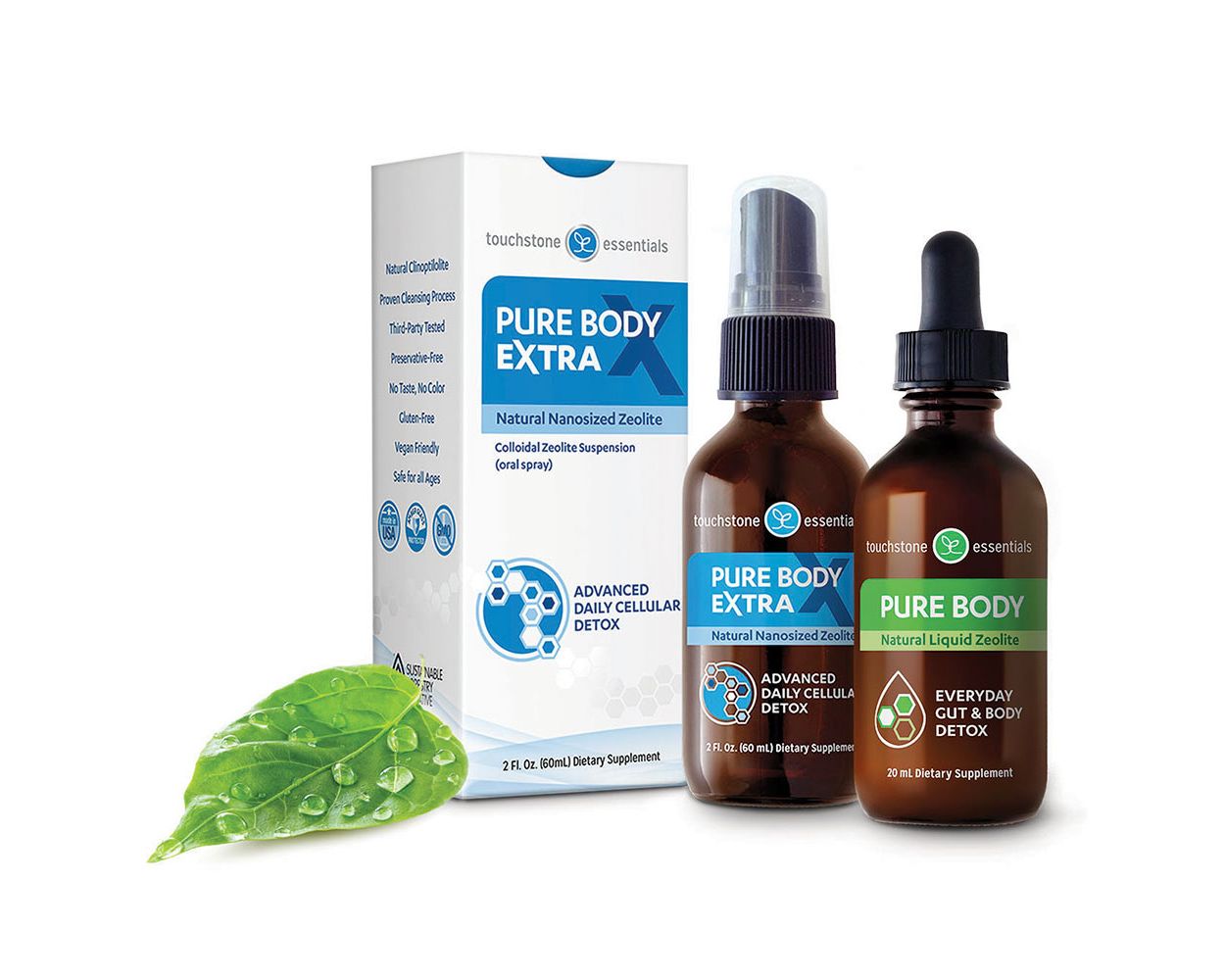 Detoxification is a must in our modern world.

Our modern world is also a highly toxic one, filled with heavy metals, pesticides, herbicides and more. Toxins are in the food we eat, water we drink, and air we breathe. Get a fresh start with the Zeolite Detox Pack. Zeolite is nature’s detoxifier, cleansing toxins from the body so you can thrive in mind and body.

Pure Body and Pure Body Extra use natural zeolite that has been purified to perfection, making it the most effective detox on the market. In just 30 seconds a day, you can help rid your body of heavy metals and toxins, and experience improved energy and well-being.

While most zeolites only detox the gut, the Zeolite Detox Pack contains two targeted zeolites for a whole-body detox. Pure Body is sized to detox the body and gut, while Pure Body Extra goes even further with nanosized particles for a hydrated zeolite liquid that reaches to a cellular level.

We only use natural, whole Clinoptilolite zeolite for the best results. Our zeolite undergoes a proprietary cleansing process to remove pre-existing pollutants from the zeolite so that it is primed and ready to trap new toxins. And our zeolite is lab tested for purity, with results posted online.

Liquid zeolite gets to work within minutes of use. Pure Body Extra's nanosized particles are encapsulated within water molecule clusters for fast, effective relief. The negatively-charged zeolite works like a magnet, trapping positively-charged heavy metals and other toxins. Once inside the zeolite, toxins are tightly bound and are excreted within hours.

How to Use the Zeolite Detox Pack

More Information
Frequently Asked Questions - Zeolite Detox Pack
How do I use the Zeolite Detox Pack?
Pure Body and Pure Body Extra were developed to work together for a whole-body detox. For Pure Body, take 4 drops, 3 times a day. For Pure Body Extra, take 4 sprays, 3 times a day. This ensures a continuous detox effect. When detoxing, it’s recommended to increase your water intake. When not in use, you can store the products in a cool, dry place. No refrigeration is necessary.
Can children take the Zeolite Detox Pack?
Yes. The zeolite Clinoptilolite has been granted GRAS (Generally Recognized As Safe) status by the FDA. Serving sizes are based on an adult’s size, so reduce the serving according to your child’s size. For younger children, a good place to start is one fourth of the adult serving size (1 spray and 1 drop, 3 times a day). For school age children consider half the adult serving size (2 sprays and 2 drops, 3 times a day). Increasing water intake supports the natural detoxification process.
How long can I take the Zeolite Detox Pack?
Zeolite is not stored in the body, passing through the excretory system (via urine) within 4 to 6 hours. Natural Clinoptilolite is safe for long-term, daily use and has been granted GRAS (Generally Recognized As Safe) status by the FDA. Given the fact that we are exposed to heavy metals and toxins every day through the air we breathe, food we eat, and water we drink, continuous use is recommended to help offset ongoing toxic exposure.
How does the Zeolite Detox Pack work?
The Zeolite Detox Pack uses natural zeolite to help detoxify the body of heavy metals and environmental pollutants. Our breakthrough processes created an optimized hydrated zeolite from whole Clinoptilolite zeolite and pure water. It is safe and gentle enough for everyday use.
What are the ingredients in the Zeolite Detox Pack?
Both Pure Body and Pure Body Extra have only two ingredients: natural Clinoptilolite (zeolite) and pure water. Both zeolite supplements are preservative-free, gluten-free, non-GMO and are all natural.
How do Pure Body and Pure Body Extra work together?
Pure Body is sized so that some will be absorbed into the bloodstream, and some will provide detoxification through the digestive tract. Pure Body Extra is sized in the nanometer range, small enough to fit inside water molecule clusters, for full absorption into the bloodstream to a cellular level. Together they provide a whole-body detox.
What is a zeolite?
Zeolites are a class of mineral formed by the chemical reaction of volcanic ash with seawater. They have a three-dimensional crystalline structure of open pores or channels that looks like a honeycomb (or cage) and are one of the few negatively-charged minerals in nature. There are over 40 natural zeolites and as many as 150 synthetic zeolites used today. We use only natural Clinoptilolite zeolite.
Why is a natural zeolite better than a synthetic zeolite?
We use natural Clinoptilolite zeolite because all of the science, safety and efficacy research has been done on Clinoptilolite. The label should say Clinoptilolite and not the generic term for zeolite (sodium aluminosilicate), which covers 40+ different types or synthetic zeolite. It is also unknown whether a "lab-grown" zeolite has complete zeolite cages (or just fragments). The complete zeolite cage is needed for the charge-based ion exchange to take place. This is where a bad ion (e.g. lead) is swapped for a good ion (e.g. calcium). Pure Body Extra is formulated using whole Clinoptilolite sized in the nanometer range and encapsulated within water molecule clusters for optimal cell uptake.
How do zeolites work?
The porous nature of the zeolite and its negative charge, allows for the selective exchange of positively-charged toxins. Inside each zeolite are positively-charged exchangeable (lighter) metals known as cations, usually calcium, magnesium, sodium and potassium. These ions are only loosely held and can be readily displaced by other substances, such as toxic heavy metals or other organics in a process called cationic exchange. Zeolites have a preference or affinity for heavy metals due to the positive charge and fit of heavy metals within the zeolite cage.
What toxins can zeolite remove?

It starts before we’re born, and despite our body’s best efforts to remove toxins, we continue to accumulate heavy metals such as mercury, lead, arsenic and others, simply because they are everywhere.

Even in Small Amounts, Toxins Can:

“While there are many zeolite products on the market today, one in particular meets the rigorous standards medical professionals seek—Pure Body.” —Alex Lee, M.D. Board Certified Internal Medicine, Gastroenterology

Powdered zeolites and most detox programs only cleanse the colon. But that’s not where the majority of toxins accumulate. They are stored in your body and in your cells. And you are continuously exposed to heavy metals and toxins on a daily basis through food, water, and even the air.

Pure Body and Pure Body Extra work together to provide a whole-body detox. It’s a natural way to clean out the environmental toxins our cells fight every day.

The Zeolite Detox Pack works to:

“Detoxification is the cornerstone of anti-aging medicine and a preventive measure to chronic medical challenges for all ages. I recommend Pure Body as a safe, natural and non-invasive way to systemically detoxify heavy metals.” —Maria Sulindro, M.D. ADAAM, Board Certified in Anti-Aging Medicine

With over 300 studies listed on PubMed on the beneficial properties of the zeolite Clinoptilolite, this mineral has gained increasing renown for its natural ability to trap toxins, heavy metals and environmental pollutants.

Our proprietary cleansing process ensures a zeolite purified to perfection, backed by independent analysis that proves it's as squeaky clean as we say. At Touchstone Essentials, we’re so confident in the science of our products that we put our results right on the website (makes you wonder why others don’t).

Why? Freshly mined, in its raw state, the mineral Clinoptilolite doesn’t do much. Its crystalline structures are pre-filled with pollutants, and it’s too big to be absorbed by the body. Unfortunately, crushed up raw zeolite is what you’ll find in most zeolite supplements on the market today.

Explore the history of zeolite and how it helps with the removal of heavy metals and other toxins from the body, with cited scientific and study references provided throughout.

Additionally, the White Paper highlights the safety and well-documented research published on colloidal suspensions. It also details the calculations of Clinoptilolite in cationic exchange, and explores the molecular forces that make hydrated zeolite an effective detoxifier.

Worldwide, scientists have conducted extensive research on the mineral zeolite Clinoptilolite. First identified for its ability to remediate wastewater, Clinoptilolite was later used in radiation removal (Chernobyl), and agricultural feed before being recognized for its detoxification benefits for humans.