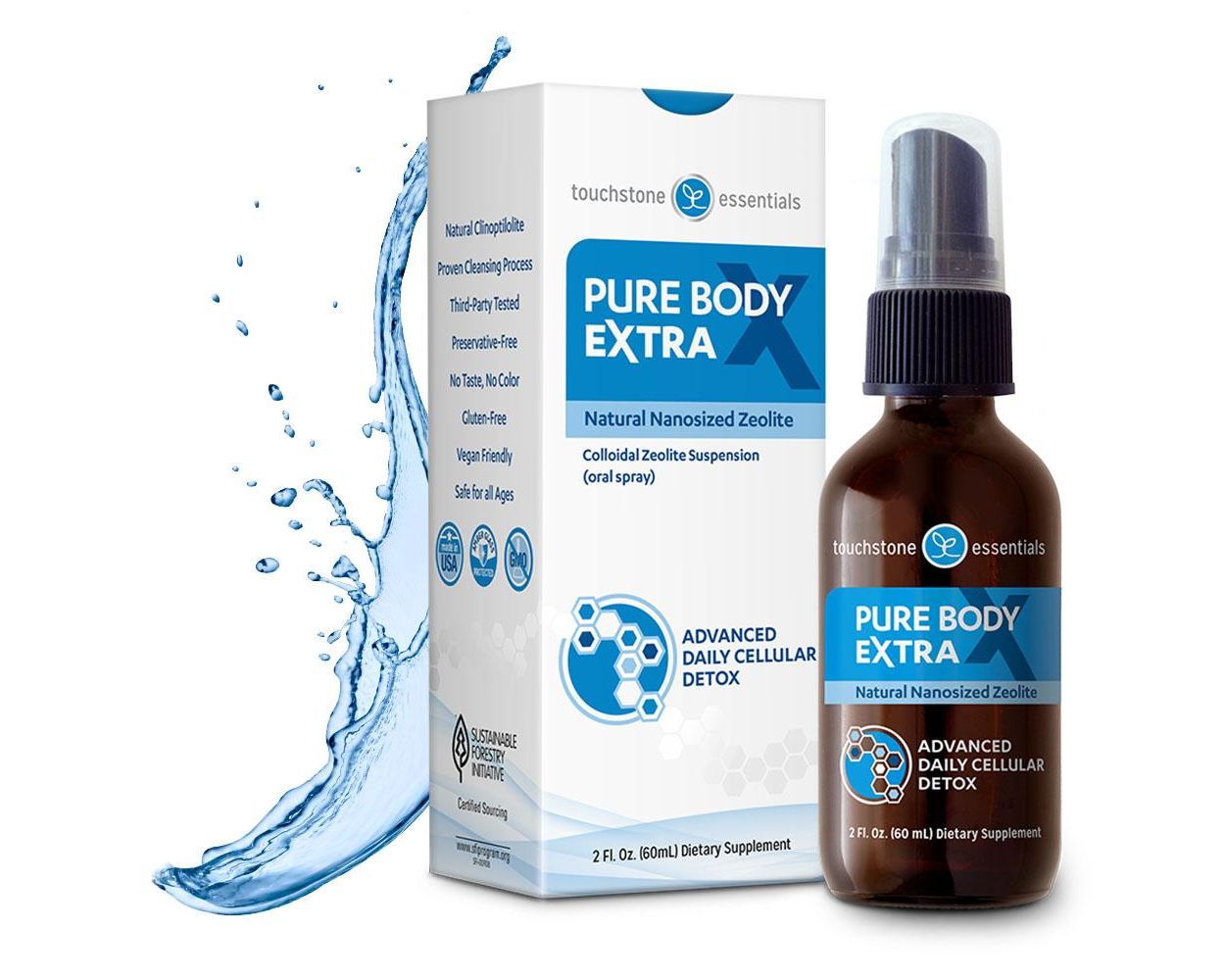 Natural mineral, safe for all ages

The original nano-sized zeolite liquid, Pure Body Extra Strength reaches to a cellular level and works like mini-magnets to attract and remove positively-charged toxins such as mercury, lead, cadmium, arsenic and more. Using advanced nanotechnology, the natural zeolite has a vast surface area to trap and remove toxins.

Natural zeolite Clinoptilolite has been granted GRAS status (generally recognized as safe) status by the FDA. Pure Body Extra Strength uses natural zeolite that has been purified to perfection, making it the most effective detox available. It is colorless, odorless, 100% natural, non-toxic and safe for long-term use.

With just a few taste-free sprays a day, you can help rid your body of heavy metals and toxins, and experience improved energy and well-being.

Powdered zeolites only work in the gut. Pure Body Extra Strength targets toxins to a cellular level thanks to nanometer sizing and advanced technology that suspends zeolite in water clusters. It’s a passive cleanse that is also fast acting.

The Laws of Attraction

Negatively-charged zeolite works like a magnet, trapping positively-charged toxins such as lead, mercury, arsenic, cadmium and many more, and carries them out of the body within hours.

Pure Body undergoes a proprietary cleansing process (lab-tested), removing pre-existing pollutants from the zeolite, so it effectively detoxifies. It is then nano-sized to create a hydrated zeolite liquid that reaches throughout the body.

How do zeolites work?
The porous nature of the zeolite “cage” and its negative charge, allows for the selective exchange of positively-charged toxins. Inside each zeolite are positively-charged exchangeable (lighter) metals known as cations, usually calcium, magnesium, sodium and potassium. These ions are only loosely held and can be readily displaced by other substances, such as toxic heavy metals or other organics in a process called cationic exchange. Zeolites have a preference or affinity for heavy metals due to the positive charge and fit of heavy metals within the zeolite cage.
Can pets use Pure Body Extra?
Yes, all animals can benefit from the zeolite Clinoptilolite. Since pets are often directly exposed to heavy metals and toxins on pavements or pesticide-treated lawns, they can benefit from detoxification. Simply spray in their mouth.
Benefits

It starts before we’re born, and despite our body’s best efforts to remove toxins, we continue to accumulate heavy metals such as mercury, lead, arsenic and others, simply because they are everywhere.

Powdered zeolites and most detox programs only cleanse the colon. But that’s not where the majority of toxins accumulate. They’re in your cells. Pure Body Extra's zeolite uses advanced nanotechnology to reach to a cellular level for a whole-body detox.

Even In Small Amounts, Toxins Can:

Pure Body Extra is a natural way to clean out the environmental toxins our cells fight every day.

“Detoxification is the cornerstone of anti-aging medicine and a preventive measure to chronic medical challenges for all ages. I recommend Pure Body as a safe, natural and non-invasive way to systemically detoxify heavy metals.” —Maria Sulindro, M.D. ADAAM, Board Certified in Anti-Aging Medicine

Every serving of Pure Body Extra works to:

With over 300 studies listed on PubMed on the beneficial properties of the zeolite Clinoptilolite, this mineral has gained increasing renown for its natural ability to trap toxins, heavy metals and environmental pollutants.

Our proprietary cleansing process ensures a zeolite purified to perfection, backed by independent analysis that proves it's as squeaky clean as we say. At Touchstone Essentials, we’re so confident in the science of our products that we put our results right on the website (makes you wonder why others don’t).

Why? Freshly mined, in its raw state, the mineral Clinoptilolite doesn’t do much. Its crystalline structures are pre-filled with pollutants, and it’s too big to be absorbed by the body. Unfortunately, crushed up raw zeolite is what you’ll find in most zeolite supplements on the market today.

Explore the history of zeolite and how it helps with the removal of heavy metals and other toxins from the body, with cited scientific and study references provided throughout.

Additionally, the White Paper highlights the safety and well-documented research published on colloidal suspensions. It also details the calculations of Clinoptilolite in cationic exchange, and explores the molecular forces that make hydrated zeolite an effective detoxifier.

Worldwide, scientists have conducted extensive research on the mineral zeolite Clinoptilolite. First identified for its ability to remediate wastewater, Clinoptilolite was later used in radiation removal (Chernobyl), and agricultural feed before being recognized for its detoxification benefits for humans.